Why BSE? We invest in you 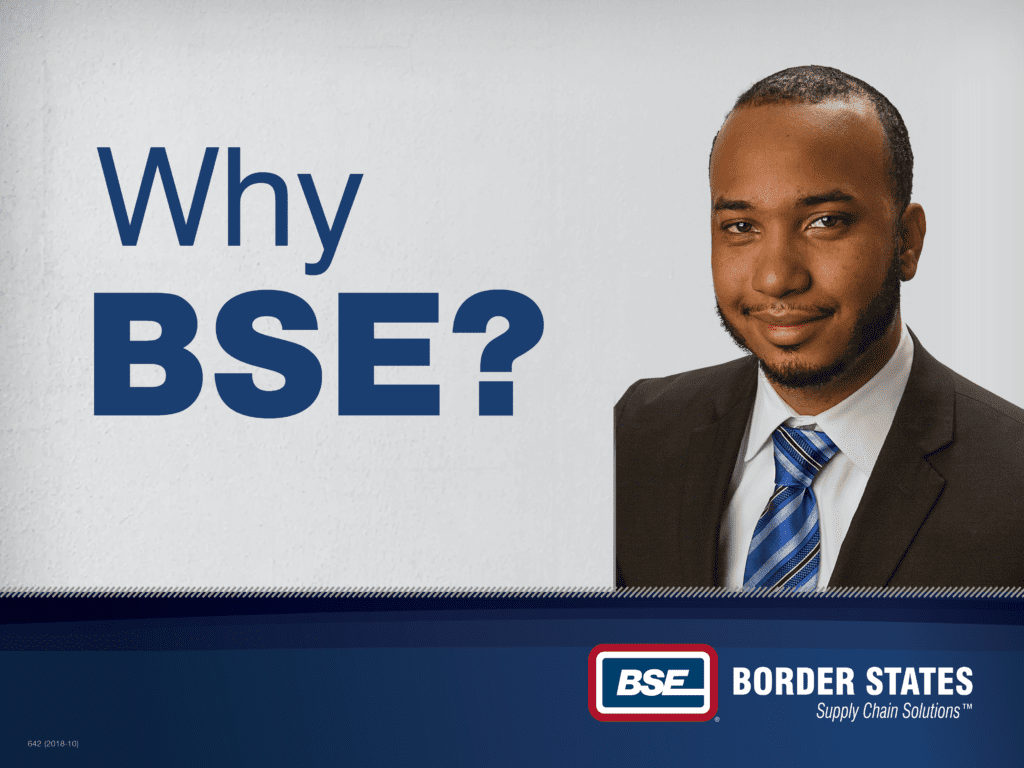 While attending Arizona State University, Naim Shamsid-Deen taught himself how to play the drums. End-of-the-day jam sessions became the perfect way for him to clear his mind and ponder his future.

The more he played, the more he began to dream of a career that would provide growth opportunities, above-average benefits and fun co-workers. So when a friend suggested he apply for a position at Border States, a 100 percent employee-owned company known for its impeccable workplace culture, Shamsid-Deen didn’t miss a beat.

He was hired in July 2017 to take part in Border States’ Distribution Leadership Program, which prepares employee-owners for future leadership opportunities by exposing them to multiple areas of the business. He gained valuable experience in multiple Border States branch locations, working largely in the following areas:

Shamsid-Deen also helped with a branch move, subbed as a Warehouse Supervisor, completed an Integrity Coaching course and visited the Branch Support Center (corporate office) in Fargo, ND. He recently graduated from the program and was promoted to Border States Quotations Supervisor in Albuquerque, NM.

“I could tell right away that if you were willing to work hard and prove yourself, there was a lot of opportunity to move up and have a great career,” he says. “Nothing seems out of reach at Border States.”

During his first couple of weeks with Border States, Shamsid-Deen was greeted by many employee-owners, a few of whom included a Branch Manager, Regional Vice President and Tammy Miller, Border States CEO.

“It blew my mind when the CEO reached out to me right away. I had never spoken to the CEO of any company I had worked at before,” he says. “I quickly realized that no matter what your job is at Border States, everyone supports one another. For 2,500 employee-owners in more than 100 locations, it’s a very tight-knit and supportive group.”

Shamsid-Deen especially appreciates that his fellow employee-owners are always willing to provide guidance and training.

“Everyone wants to teach you the business so we can all become more successful,” he says. “I’ve never felt so supported by a company before coming to Border States.”

What does it mean to be an employee-owner?

To Shamsid-Deen, being an employee-owner means being part of something bigger than yourself. It’s about working hard to share in one another’s success. This idea comes to light through Border States’ employee stock ownership plan (ESOP)

“I think the ESOP is absolutely fantastic,” he says. “Everyone is invested in helping our company grow. Anything that benefits the company benefits us all.”

In addition to the ESOP, the company often provides profit-sharing bonuses when its yearly goals are met.

Shamsid-Deen is thankful to have found a company that is invested in him. He’s become a huge fan of the employee-owned business model.

“If you’re willing to work hard and be humble, putting yourself in a position to be led so you can lead later on, there’s no greater place than Border States,” he says.

Why BSE? Advance with any educational background